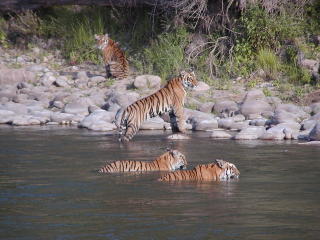 After a nice train ride from Varanasi, we arrived at Rishikesh early in the morning, took a Vickram (local version of auto rickshaw) through Hardiwar to Rishikesh, in the first hotel we met Aviva, and we rented a room. It was shocking after Varanasi, to see a well maintained hotel, with food which is almost Israeli, clean and bright. There were a lot of Israelis around, and some of the restaurants have a Shenkin feeling, young Yuppies discussing what class to attend next. After one night we moved across the river to SantSeva Ashram Guesthouse, which had a better view of the Ganges, but was so close to the river that the wind storms brought sand into the room. Eti started feeling very bad, and despite her visit to the Ayurovedic doctor, her situation deteriorated. She felt very bad at the hotel, so we moved to Swiss Cottage which is a little off Laxman Jula, and is all green and cozy.

After one more horrible night we went to a hospital which is rather a small clinic in Rishikesh, and the local doctor gave her antibiotics and eucalyptus essence for inhalation, and this made the trick and she recovered.

In one of our wanderings along the river we met an old Baba who spoke excellent English and sang self-composed hymns.

We went to Hardiwar with Aviva and Ofra, went with a cable-car to visit a nice temple on top of the mountain, and went back trough a line of huge and decorated shrines, each with bigger and more colorful naïve sculptures of Hindu gods.

At a later day we went and saw the Puja in Hardiwar, which was very big, 21 centers of fire were lit, and thousands of people attended, unlike the Puja in Varanasi, there the people participated in the ritual, prompted by the attendants they sang, hollered and shouted, were excited and enjoyed it very much. The ceremony ended with the usual floating of candles and offerings on the Ganges water.

Back in Rishikesh we had many events – we visited the Ashram where the Beatles studied Transcendental Meditation with Maharishi Mahesh Yogi, we saw a Guru talking to his followers and met his daughter, and attended the big and theatrical Puja in Ram Jhula, with a big choir of boys and accompanied by an orchestra of drums, harmonium and flutes and cymbals.

We went rafting on the Ganges, on the same boat with a friend of Naama and her friend, crossed 5 whitewater rapids, called by the exquisite names of "Return to Sender", "roller coaster", "golf course", "Club House", "Double Trouble", "Initiation", and the "Terminator", . The end point was Ram Jhula.

We met a very nice travel agent named Jayant, who took us on a day trip with a jeep to the nice spots around Rishikesh. We visited a cave and mandir (=temple) named Vashisht, where we met a very charming Sadhu, Shantananada from Chennai, who was a government official who retired at 29, left his wife and children and is wandering since then all around India, talking on occasion and retreating a lot. He looked totally happy, and joked that when the sadhus say "Harry OM" (bless god) they really mean "Hurry Home"; get back home to the divine where you belong.
We bathed in a small and cool waterfall, and finished with a remote nice temple on a mountain top.

Here there is not very much to talk about – the distinguished reader is requested to refer to the wild life pictures from that date. The conditions were abominable, the food terrible, the beds hard as plywood, but the sights were excellent, the wild elephants charming, and the seeing the tigers was sublime. First we saw 4 of them bathing on the river under the watch tower, and the next morning we rode on back of an elephant, which was prodded by his Mahout to go straight where the tigers lounged, so they had no choice but to leave the place, and cross the river just under our admiring eyes.
פורסם על ידי Efi Paz ב- 6:27 אחה״צ