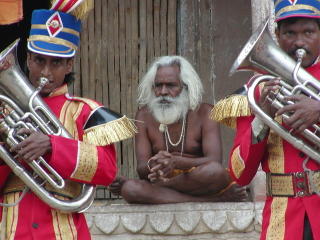 Our first trip in real Indian train – a 2nd class slipper, with lots of people but not too bad – we enjoyed the company, the peddlers that went on the train every now and ten and sold food and drinks, and the views. We met two "Hijras" which are castrated men who wear women cloths, and get Baksheesh from everybody who does not want to be hassled. We arrived at Mogul Sarai very early in the morning and took an auto rickshaw to Varanasi.

From the train station we took an auto rickshaw following the Grand Trunk Road described by Kipling in Kim. This is real India – stinking, dirty, cows in the road, pigs in the trash, naked children bathed by their mothers, people shave and cut hair in the street, millions of beggars holy sadhus, some genuine and many fake.

The driver tried to persuade me not to take the hotel we chose in the Lonely Planet, and took us on purpose through heaps of trash and a very bad way. We did not give in, and got a small and run-down room, but air-conditioned which was all we needed for the moment. After a short nap we went to the railway station to change our ticket, so we will go from Varanasi to Hardiwar directly rather than through Delhi. The station was full of pilgrims crouching on the floor, eating and talking, and the queues for tickets were enormous, but we went directly to the tourists office, and were treated nicely and promptly, and we went back to "our" ghat, eating in the near by Haifa restaurant which boasts a near eastern cuisine but it is rather Indian-style.

In the evening we participated in the Puja, which is very stylized and choreographed very minutely – four young and handsome monks, using smoke, incense, fire, conches and prayers, very impressive and moving.

The day after we woke up early and saw the morning ritual bathing of hundereds of people in our gaht, and went to the Banares Hindu University (Banaras is another name for Varanasi), very spacious and impressive – wide boulevards, big schools and a very modern temple, nice and simple.

From there we went to the central Dashamawat Ghat, which was quite empty, so we continues north, and met some young man with very good English and works as a tout for Baba Katan, a silk merchant specializing in selling to Israelis. He took us to ManiKarika Ghat which is the big burning Ghat. One of the local body cremators welcomed us and explained the whole process, and asked us to donate money for the local hospice, where old people come to spend the end of their life and be near the cremation ground, following the Hindu belief that if you die in Varanasi you get instant release from the cycle of life and death. We continues from ghat to ghat, and met Baba Katan himself. He peaks fluent Hebrew, and we were convinced he was in Israel, but he is a local Hindu, speaking Hebrew for 14 years, which he learned form the passing Israelies. He told us about the Jewish home which is near his shop. We went to another silk shop, went to the roof and saw the golden temple which is a subject of Muslim-Hindu controversy and which is forbidden for tourists. From there we went to the Jewish House and met Ronit and Amnon, two people that grew up secular and became ultra orthodox, Braslaw Chasidim, who came there from Goa with their two children, and will arrange the Seder a couple of days later.

Coming back to the hotel we were told by the owner that we will have to leave on the 19th since the room is booked for that date!. We were very enraged, and looked immediately for another place, found a very charming Guest Home near by, and moved there. There was no A/C (=air-conditioning), but the big ceiling fan and another fan which directed the heat to the window were enough, for the room was internal and cool. We went again to the Puja, and the morning after I went down to the Ghat and met Ragiv, an interesting American of Hindi origin who was in an extreme Christian sect, was admitted to a mental hospital and came back to Hinduism.
Back at Assi ghat towards the evening, we saw a crowd in the adjoining Tulsi ghat, and many boats in the river. Going there we found that a very big flotilla is ready for sail, celebrating the birthday of Rama, and this ghat was the residence of Tulsi who wrote the most popular Ramayana which is the story of Rama and his wife Sita, how she was kidnapped by the devils and saved by Hanuman, Rama's monkey-friend. Two brass bands were truppeting, and a full-fledged Puja was celebrated. I talked with some intelligent man who asked me if we want to board one of the boats, we agreed enthusiastically and he told us where to go. Eti was interviewed by the local Sahara television reporter, and we started going northward along the river toward the north most ghat, where we attended a cultural function, singing and a Shiva dance, and then were taken back by the same boat.

Sarnath –
This is where the Buddha cmae after his awakening in Buddghaiya, met his ascetic friends and gave the first sermon, "The discourse on turning the wheel of Dharma", which includes the four noble truths and is the very basis of the whole Buddhist dharma or way of life and belief. Every Buddhist denomination built its own temple here, so there are Thai, Japanese, Tibetan, Burmese, Chinese and more temples, and even a Jain one for one of their saints lived here. The famous deer park is inhibited by deer and the place where Buddha gave the sermon is surrounded by a fence. Near by there is a very impressive archeological museum, with the original sculpture of four lions which is the national emblem of India.

The day after we were taken by Mishra, our auto rickshaw driver, across the river to the dilapidated Raja Palace and the old and impressive Durga temple. We also visited the "new" Durga temple which is not far away from Assi ghat, and the little Ananda Bhag which is a charming little garden with a mausoleum in the center, maintained meticulously by a smiling gardener.

Seder night was a big disappointment – the place was hot, inconvenient, the organizers talked too much and preached endlessly, and the only real gain was that we met Aviva and Ofra Nunni, with whom we spent many lovely days later in Rishikesh.